End of Life is not a subject everyone wants to discuss; however, it is a subject that comes up often here at Home Instead Southampton. We regularly ask our clients what they would like to achieve by having a CAREGiver support them and the answer is often ‘Oh I just want to stay here at home’.

Due to the commitment, love and care our CAREGivers give, Home Instead Southampton have supported many clients near the end of their life with this wish, and there is some comfort in knowing that we have helped achieve this in the saddest of times.

Christine and Patrick moved to the Locks Heath area in 2014, after spending some 45 years in their family home in Shoreham-by-Sea. Moving after living somewhere for such a length of time was a massive change  for them – their family home was not only where they brought up their children, but was also where they made lots of friends, family memories and had active social lives.

Sadly though, the house and stairs became too much for Christine and Patrick, and they reluctantly gave in and moved – looking to the positive that they would be closer to Jane, her husband Mark and their three sons.

This proved to be a good decision as it took away the worry of managing a large house and garden and they really enjoyed living in a ground floor flat overlooking the park and watching the dog walkers!

At the time they moved to Old Common Gardens, Patrick needed some personal care support for washing and dressing. Initially Christine assisted him with this but, as her neurological condition worsened, Jane contacted Home Instead. The Home Instead manager quickly visited them at their home to really understand their needs.

Jane said: I was very impressed that Home Instead took time to find out not only Dad’s care needs, but also his hobbies and interests. They then paired him with a CAREGiver who had similar interests. Dad loved chatting to his CAREGivers. From the outset they were professional, friendly and organised. The CAREGivers also got to know Mum and the daily visits became something that both Dad and Mum looked forward to every day.

With the help of our CAREGivers, Christine and Patrick quickly built up a new social life as their daily needs were taken care of and when their CAREGiver left them for the day, they were ready to enjoy days’ out with Jane along with the events held in the communal lounge – be that chair exercises, ukulele evenings or fish and chip lunches!

Patrick was determined not to go into residential care and as his needs changed, Home Instead adapted, and offered more support enabling him to stay in his flat up until his death in 2016.

Christine’s neurological disease progressed quite quickly after Patrick’s death and her care needs increased dramatically, but she too was determined not to move into residential care.

Jane said: Home Instead once again fully understood her wishes and fully supported her pulling out all the stops to ensure this happened. Every 3 months, I would have a meeting with Managers, Denise and then Laura, to discuss Mum’s changing needs - knowing that if I had any questions, concerns or suggestions I could call them in the meantime.

As Christine’s mobility changed and declined, she clearly struggled to get in and out of bed and on/off her sofa. This was raised by Laura who was Christine’s CAREGiver at the time and the office staff worked alongside the GP, Community Nurses, Occupational Therapist, and other professionals and eventually Christine was provided with a rise and recline chair, and funding meant that she was also entitled to a fully fitted wet room and a hospital bed.

Jane said: Home Instead were instrumental in helping to ensure that Mum got all the aids and funding that she was entitled to.

Over the last year or so, Christine’s neurological disease took an even bigger hold of her – this meant that her mobility suffered, she had double vision and often vomited several times a day. The CAREGivers that supported Christine dealt with various things daily as each day was different for her, yet they did so with professionalism, dignity and respect.

As things progressed, Christine slowly began losing her ability to walk or talk and needed support with all aspects of her daily living needs – from bed bathing to feeding. When the COVID pandemic struck, Jane and her husband Mark decided to take on the bulk of Christine’s care to minimise the amount of people coming and going, sadly during this time Christine took quite a turn for the worse and her GP diagnosed just a few months to live.

Laura, who was now the Field Care Supervisor for the area, encouraged Jane and Mark to allow Home Instead to take back the care. With a push for increased funding, Home Instead managed to quickly get a team in place providing support for Christine of 2 CAREGivers, four times a day and this enabled Jane to spend quality time with Christine as Mother and Daughter, not as Mother and CAREGiver.

The CAREGivers included those that previously supported Christine so they were familiar with her likes and preferences which could quickly be passed onto the newer team members.

Towards the end of Christine’s life, she was completely unable to talk and could barely move unaided and yet, because all of her CAREGivers knew and understood her so well, they intuitively were able to provide her with what she wanted and needed - from the audiobooks she loved to listen to, to the foods that they prepared in the way she enjoyed them, to the way she liked her hair brushed, to the bird feeder they bought so she could watch the birds from where she sat – and through all of this Christine still managed to give them a smile and show her appreciation.

As Christine spent her last few weeks at home, her CAREGivers ensured she was comfortable and freshened up at every visit and continued to do so with the support from Laura and the office. The CAREGivers were tuned in to changes and acted quickly, ensuring Laura could contact the GP and Christine’s family as the changes happened and developed. Sadly, the inevitable happened, yet with the support of Home Instead Christine died in her own home, surrounded by her photos and memories and with her daughter by her side.

Jane said: The CAREGivers showed Mum so much love and compassion - from singing to her and showing her family photos, playing her favourite music on Spotify, giving her flowers from their gardens, making a dream catcher to hang in her bedroom that reflected the sun and chatting to her about all sorts of diverse things; from their own family stories to dog breeds to politics - everything that Mum was interested in (which was almost everything!).

Aside from the practical support it was the love and emotional support that the Home Instead team gave both Mum, me, and the rest of the family, that made it possible for her to stay in her own home, where she was so desperate to be.

As a nurse myself, I am convinced that it was the competence, kindness and love that Mum and Dad received from all of the CAREGivers and managers at Home Instead that made it possible for them to remain in their own home and make the last years of their lives as happy as they could have been and I will always be so grateful to them for this.

Following the passing of Christine, Home Instead held a gathering for all of the CAREGivers who had supported Christine. They had an opportunity to share stories about their special moments and memories of their time with Christine. All felt privileged to have been able to care. We are so blessed to have such an amazing group of CAREGivers who have such compassion and understanding for our dear clients. 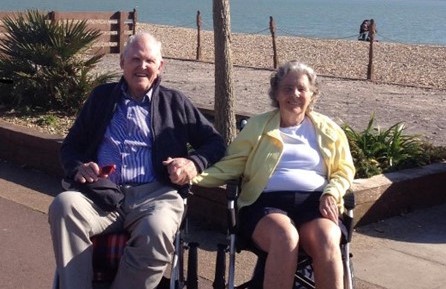