At Home Instead Southampton, we love to engage with our local community. One of the ways in which we do this is by sponsoring the local BTC Southampton Football Club. The manager, Kevin Roberts, has told us here about the under 10s Vipers' season and some details about them. Robin, one of our Field Care Supervisors, has been regularly attending games and supporting from the side. Robin has been with Home Instead for 6 years and looks after a number of Clients from companionship care through to live in care. Thank you Robin for supporting this young football team and our clients.


"Our season has had its ups and downs, this is our first year together as a team; not just the players themselves, but myself, Craig, and Brendon as a coaching team also. Craig finished playing last year and wanted to develop his coaching skills. He is only 19 and has a great footballing brain; he has a flair for the details. He will be one to look out for in the future and any team lucky enough to be considered by him would've had to have gone through me because I really couldn’t have done without him this year. Brendon is not only my junior coach at 14 years old but he's also my son who wants to go into coaching/teaching when he leaves school. He has taught the team what it means to work hard so you can reap the rewards. Having played 4 years for me, he knows what I will demand from any player of mine and the success we have had due to this. Without him by my side, I don’t think we would've had the success that we have this year.


Our first game of the season I can remember with remarkable clarity - we lost 3-2, and to the players it was a defeat but to myself it wasn’t, because I saw a true team and not just a bunch of players. They were 3-0 at half time, heads down, and ready to give up but our goalkeeper Dan gave an amazing pep talk with only positivity which inspired the next player to do the same, then the next player and so on until the whole team had rallied up our morale. This incredible positivity continued all season. We scored our first league goal, scored by Troy, a breakaway goal which really pumped the team on to get another from Harry. They pushed for the equaliser but ran out of time.


And we did have some shockers:

5-1 loss to Hythe and Dibden


We finished mid table, but it’s not the league position which made me the proudest of our team - it’s the little moments throughout the season. Having two 9-year-olds give a half time team talk with such incredible passion and positivity. Watching our smallest player with the biggest heart go 50/50 challenge against a goalkeeper more than twice his size and win and score from it. Seeing our captain score from his own half. Seeing what a small bit of belief can achieve. Watching our goalie pull off save after save and still managing to get on the score sheet in the season from a corner.


I got to witness first-hand the amazing achievement of four players that moved up four leagues from previous season, one new player to football and five players that came across from Totton & Ealing who were division one. I believed that as a team they could hold their own in division three when others didn’t, and they proudly proved me right.


We ended up with two top goal scorers, Cameron and Harry, both with eleven goals, and Isaac was only two behind with nine goals.


Before I go on to tell you about end of season awards, I got an email today which has made even more proud of this team. As a team we achieved a 100% respect score from our opponents throughout the season. To make this achievement is a massive, huge, amazing thing because it shows they not only respect each individual player they come up against, but also every opposing manager and supporters. They've really proven what they can do on and off the field. To celebrate the 100% respect score, we have been invited to a tournament on 29th of August to play and collect our medals.


I must end this by saying that we as manager, coaches, and players are not only a football team but we are truly a football family. I respect every single person within our football family, and I have nothing but endless praise to say about them." 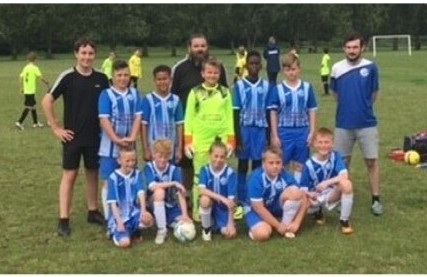