Local home care provider, Home Instead Exeter and East Devon is helping the Exmouth Courtney Memory Café to fulfil a dream and is providing the funds to take 50 of its members and carers on an afternoon visit  on the 11th December, to see the Christmas Lights and have afternoon tea at Killerton House, a National Trust property near Broadclyst.

The Exmouth Courtney Memory Café which meets at the Imperial Hotel in Exmouth on the last Thursday of the month, is a support group for people living with dementia and their carers. They regularly have over 40-50 people attend every month and is an opportunity to meet, over a cup of tea and cake and share in relaxing conversation in a fun together.

Mark McGlade said “ It is our pleasure to be able to support the members of the Exmouth Courtney Memory Café and to add some seasonal joy to the lives of those living with dementia and their carers. Jean had mentioned to me a while ago, that they had often talked about going to see the lights at Killerton one day but did not have the available funds to hire a coach. At Home Instead, we support many people living with memory problems to live well in their own homes and we know how important it is for them and their carers to be able to continue to be engaged in the local community and enjoy life to the full. We are committed to raise awareness of dementia and improve the lives of those living with the condition”.

Jean Honey, the Exmouth Cortney Memory Café  said‘ The most generous donation from Home Instead means the Exmouth Courtney Memory Cafe’s dream of a Christmas trip to Killerton House is made possible. The members of the Memory Cafe will now be able to travel in style on a luxury coach to enjoy the festive celebrations at Killerton House thanks to this wonderful donation from Home Instead. This will truly bring much joy into our members lives at this special time of year. Thank you so much Home Instead!

Home Instead with offices in Budleigh Salterton, supports local people to live independently in their own homes. They are the only home care provider in the South West rated 5 Star outstanding by the CQC and they specialise in supporting people with memory problems to live well in their own home.

The Exmouth Courtney Memory Café will be holding a fundraising coffee morning at Exmouth Rugby Club on Wednesday 13th November between 10am and 12pm, if anyone would like to come along. Entrance tickets are £2 which includes tea /coffee and cake. 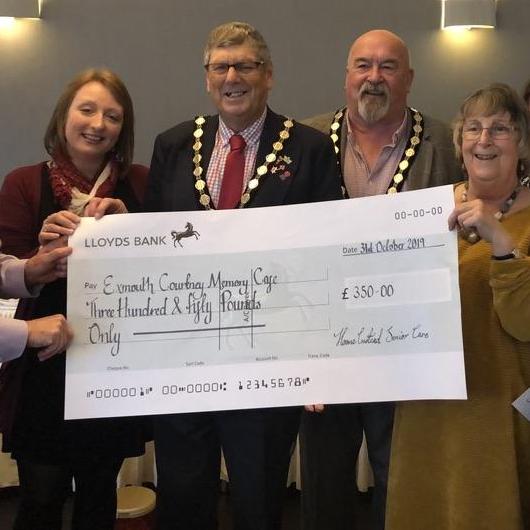