For anyone who has visited us at our Gresford Office, there’s something in the village that you’ve probably driven past numerous times and may not have even taken much notice of it.  But it’s something that forms a really essential part of the areas history.

This fountain sits on the junction of Chester Road and the Old Wrexham Road, opposite the Plough Inn.  But why is it there?

Well until 1861, Gresford had a very poor supply of fresh water.  The most accessible place from which to draw water was a dirty pond – now known as the Gresford Lake.  Just imagine popping down there every day to obtain your ‘fresh’ water!   There were wells situated around the village – however these were far too deep to access manually.

Miss Anne Townsend was a local lady, from Rossett, and was of very comfortable means and influence.  She later lived in Westwood House, Vicarage Lane in Gresford.

Using her status, Miss Townsend resolved to help those in need whenever she could.  Enlisting the help of her friends, she initiated the plan to build a hydraulic ram behind one of the wells in the village.  Water was then pumped from here to several taps, one in the centre of the village, one near to the church and one opposite The Plough, where the fountain that we know today is situated.  All villagers were supplied with a key to access the taps – the flow was slow but it meant clean water for everyone.  Due to the speed of collecting the water, the taps became meeting points – or should we say gossiping points – for the local housewives!

The Gresford Fountain was installed in 1862 – built as a drinking fountain for passing travellers.  To pay for this, Miss Townsend set about fundraising – not dissimilar to what would happen these days in the local community.  £200 was raised at a village fete.  Miss Townsend herself personally knitted, and sold, 500 pairs of baby socks over the course of three years to raise a total of £300.  An amazing feat – in Victorian times, this was a considerable sum and would be the equivalent of around £32,000 today.

Whilst there is no longer a water supply to the tap, the fountain was restored by Gresford Community Council in 2014, with full credit to Miss Ann Townsend.  There is also a stained glass window dedicated to her memory in All Saint’s Church.

Do you have any interesting facts or memories about Gresford?  If so, we'd love to hear them. Head over to Facebook and share on our Monday Memories post! 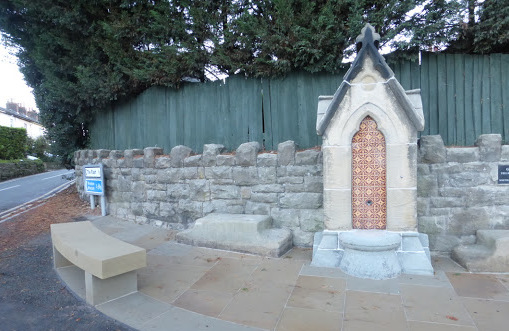