Our Director, Fatta successfully completed Virgin Money London Marathon 2019. Fatta ran the marathon in aid of The Stroke Association, a charity that not only campaign for better stroke care, but also invests in research and fundraise to expand their reach to as many stroke survivors as possible. Fatta raised over £2300 so far for the charity and donation are still being received at https://uk.virginmoneygiving.com/fbthapa

2019 Virgin Money London Marathon took place on Sunday, 28th April 2019. We reckon that 39th edition of the London Marathon was the best one ever. Fatta was one of 42,549 runners to reach the Finish Line, the most ever in the history of the race by more than 2,000 people. Eliud Kipchoge set a new course record time of two hours, two minutes and 37 seconds. The event broke the £1 billion mark for the amount of money raised for charity since the first event in 1981.

Fatta completed the 26.2 miles marathon in 06:10hrs. He said -"It was wonderful experience, the crowd was amazing". 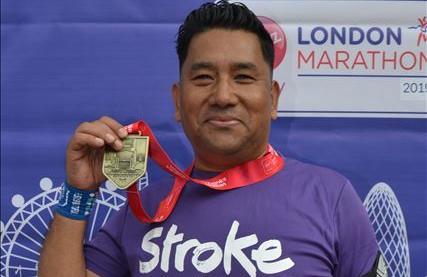