Home Instead Calderdale’s first ever Santa-gram campaign has been a great success, spreading Christmas cheer to seniors across the local area.

Launched in November, staff reached out to primary schools across Calderdale to ask school children to create a special Christmas card or letter for an elderly person this Christmas. Most of our elderly population have experienced isolation and loneliness this year due to COVID-19, with many continuing to isolate over the Christmas period.Nine local schools signed up to the create Santa-grams for older people and Home Instead received 696 Christmas cards, all decorated or hand drawn by children from age 4 to 11, plus a further 427 items including bookmarks, letters, pictures, decorations and riddles.

Morrison’s supermarket in Elland, Halifax also got involved, with customers donating presents to the campaign.

The Santa-grams were packed into envelopes and delivered along with the presents to retirement homes, care homes, pharmacies, churches and community groups including Memory Lane Dementia Café and Calder Community Cares. The company also teamed up with Age UK Calderdale and Kirklees who helped to distribute the Santa-grams to their network.

Home Instead added one of their festive activity guides with every Santa-gram to give older people/recipients some puzzles, quizzes and other challenges over the Christmas period.

Alec Clark of Sowerby Bridge received a Santa-gram along with his home-delivered pharmacy prescription, and phoned Home instead just three hours after it was delivered to comment: “What a fantastic idea! I love the personalised Christmas card from a local school, it felt like it was sent by someone who knows me. Very personal!”

“Fantastic idea.  I love the personalised Christmas card from a local school.  It felt like it was sent by someone who knows me.  Very personal!”

“Some people do not have the luxury of lots of family and friends around them, but lockdown restrictions have further heightened feelings of loneliness, isolation and separation for many people. So, having these Santa-grams to hand out to our residents has been a lovely gesture – thank you to all the children for creating the cards and getting involved.”

Margaret Rooker (pictured) receives live-in care services from Home Instead, from caregiver Cathryn Frankland. Cathryn presented Margaret with her Santa-gram, along with a framed picture created by one of the children that took part in the campaign. She was absolutely delighted to receive the Santa-gram, which brought a smile to her face, alongside making her feel appreciated and remembered!

Cathryn lives with Margaret at her home to provide round-the-clock care. 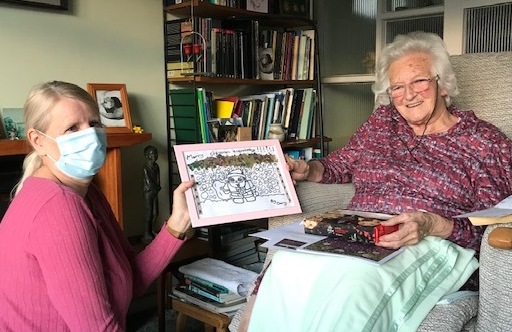