Suhail and Tasnim from Glasgow 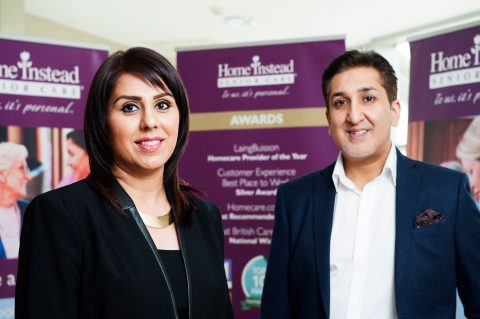 Two key factors have created a perfect landscape for homecare franchisees to flourish in Scotland. Recent legislative changes have brought in self-directed support enabling individuals to have a choice over care options. People are also wanting to experience a better standard of care for themselves and their loved ones. Together, this has created market opportunity for private homecare providers that can offer quality and excellence.

Here Glasgow husband-and-wife Suhail and Tasnim Rehman talk about their franchise journey, not as co-owners of one franchise, but as territory neighbours with multi-award winning franchisor Home Instead Senior Care.

When Tasnim saw the success of her husband’s Glasgow North Home Instead franchise – she decided to call time on her job in retail and embark on a second career in the homecare sector instead.

Tasnim opened up the Glasgow South office, the neighbouring territory to Suhail – making the entrepreneurial couple franchise neighbours in turn.

April 2017 will mark one year since Tasnim made the move into the Home Instead network. And she says she has never looked back since, despite 14 years working her way up the retail career ladder with some major global brand names including Chanel.

It was the Home Instead ethos that Tasnim experienced through Suhail’s franchise journey that started to call her away from a ‘lifetime’ in retail.

She said: “I was seeing the difference my husband’s business was making to people’s lives, how the Home Instead care model was truly helping clients and their families in turn. I was still working in retail but I was getting the Home Instead ethos by ‘osmosis’ you could say via Suhail.

“I had a dawning realisation that I wanted to own my own franchise, I was ready to be a businesswoman in my own right. After 14 years, I was ready to ‘cut the cord’, leave Chanel and move from cosmetics into homecare.”

Tasnim opened her Glasgow South office in spring 2016, becoming the brand’s 4th Scottish franchisee at that time. As she opened her office, Suhail was on his way to a £1 million turnover business, having opened the Glasgow North office in 2014.

The former director of a global software company, Suhail had sold his shares and was looking for a new business opportunity in 2014. He didn’t want to take the risks associated with a conventional start-up given the high rate of business failures.

“Franchising isn’t as big in Scotland but I knew it was the answer for me. I wanted a proven business model not risk. I’d looked at all kinds of franchisors from Domino’s to Pizza Hut when a friend suggested homecare.

“With society’s generally ageing population and Scotland’s personal care funding changes, I could see the landscape was changing and the potential market opportunity for private homecare companies that could provide quality and choice.”

Added Suhail: “I can honestly say that there is no selfishness in this franchise family, instead there’s robust support in any area you need in order to succeed. Plus, there’s a genuine spirit of willingness to share ideas and best practices right across the network.”

Added Suhail: “Franchising is clearly a growth market in Scotland. Out of over 900 franchises in the UK only around 500 currently operate in Scotland. This represents a great opportunity for potential franchisors and franchisees looking to enter the market and tap Scotland’s vast entrepreneurial and management wealth.