Hi guys, I have, have you? Watched the first episode of Inside the Care Crisis with Ed Balls, that is. It’s amazing. The second episode, which concentrates on what us at Home Instead Dartford excel in (no false modesty here), domiciliary care, is on tonight on BBC2 at 9pm. The first episode concentrated on care homes, and was an eye-opener for me, as I have only ever worked in peoples’ own homes in the community.

The programme made me very proud to count myself as one of this country’s carers, but also a little annoyed, as this sector, which as we are all living longer now, is a fast growing one, is underappreciated, to put it mildly, by the people in charge of the country, whatever their political outlook. We are seen as ‘just carers’, an unskilled job. This is so sad, but no one would really appreciate the job we do until they walk a mile in our sensible shoes. I used to work for the City of London Corporation, as a library assistant in the Barbican Library. I was very proud of being a City worker, and as an employee of the Corporation we got to have our annual Christmas meals in the Great Hall of the Guildhall, the same place that the Queen made her famous ‘Annus Horribilis’ speech in 1992.  Yes, I was very proud to be working for the Corporation, though the actual job I did wasn’t mentally challenging, and even boring sometimes. BUT when I started working as a caregiver for Home Instead Dartford- and even now, eighteen months later - oh my! My chest swells with pride, it’s the most wonderful job I could imagine, and I am so proud to work for the company I work for too, I will never contemplate going to any other company. They are stuck with me, poor things! It isn’t for everyone and certainly some people have joined, then exited our merry little band in quick succession.

We have a lot of WhatsApp groups within our work set up for various clients that only a certain number of employees will be members of, but our main group for general information or questions which all employees belong to is called – can you guess? – yes, it’s called Not All Heroes Wear Capes. We all also got a mug last Christmas as one of our presents from our amazing employers, Christina and Ram, that also has this slogan on it. I am inordinately proud of this mug, it’s ridiculous, but it’s true. We aren’t ‘just carers’ we have so many skills between us it’s ridiculous! Some of us are heroes in their lives out of work too! Three examples:

J – who now works in our office first joined as a caregiver. We are all first-aid trained when we start and one day, J was in a local café when someone at a nearby table started choking – J coolly and calmly remembered her training and managed to dislodge whatever the person was choking on. Without exaggeration, J probably saved this person’s life.


Y – one of our caregivers – also used her first-aid training when a man collapsed outside her home. She knew exactly what to do and kept the person safe until the ambulance arrived.


C – this is an interesting one.  C was working as a carer for another company when she stopped to help at an accident outside our office when it was based in Swanscombe. The person who had been involved at the accident was a colleague from another Home Instead office who was just leaving a meeting with our bosses Christina and Ram. C did her stuff and Christina and Ram were so impressed they said that whenever she felt like a change in company, to come and have a chat with them. Happily, she did just that. She joined as a caregiver, and soon was promoted to Senior Caregiver.

They are just some of the things our team do in our spare times, we also, variously look after our families, study for qualifications, volunteer at charities and care for our own vulnerable folk volunteering to – not forgetting volunteering to put in extra hours if work needs additional help due to some unexpected emergency.  All of us go above and beyond in work time too.  Very often to our clients, we are heroes. Our capes are our PPE.

In the programme, you see Ed working as a carer for a while, experiencing what it’s REALLY like to do our job. Before he does, though, he talks to his sister about what they think the job does entail – their mother is a resident in a care home now, as she has dementia - the general thoughts were changing pads, wiping bottoms, and a quick wash. Bish, Bash, Bosh. Simples! Ah, my friends, it isn’t! This job stretches you intellectually, physically, and emotionally. I can honestly say that I have never been bored or counting the minutes till I finish. Sometimes you’re in the depths of despair, feeling the same as your client’s family, when you are trying to get help for certain needs in place, other times you’re in hysterics because your client has said something funny – on purpose, I hasten to add, I have one client in particular who is a natural comedian!  Only last night, on a visit to a war veteran my partner for that visit and myself, which was the last visit of the night for both of us, overran our time because our client, who is a particular favourite of mine, was low in spirits. He hadn’t been too bad for most of the evening, I had even got him singing along to part of ‘All the Nice Girls Love a Sailor’, which I started singing as he was in the Navy. But just as our visit came to an end, he wanted to talk. He’s a real worrier, and just letting him talk to someone who isn’t family means he can express things he can’t to other people. We let him talk, and tried to reassure him, and after around 15 minutes he had recovered himself a little, and we took our leave. He thanked us as we left, we told him there was nothing to thank us for. You see, we were just doing our jobs, ‘just carers’.


Carers are thought of by some people as the lowest skilled, so therefore maybe of low intellect, people who couldn’t get any better jobs. Not so! I have met some of the most amazing people in this job and made more friends in my 18 months here than my 22 years in the City of London. We call ourselves TeamPurple, and we really are a team. I am absolutely honoured to work beside these guys and gals, I just wish everyone else appreciated them like myself and our clients and their families do.

The title of this piece is called ‘Not All Heroes Wear Capes’, but I do know of one hero who DOES have a cape. My esteemed colleague N, the third of us Senior Caregivers, is an absolute hero in her private life as well as one of our team’s absolute stand-out stars, and for Christmas last year her children gave her a cape because not only is she a hero to us, but also to her family. What a girl!

I am going to leave you with the slogan that is printed on our Christmas gift mugs.


Not all superheroes wear capes! 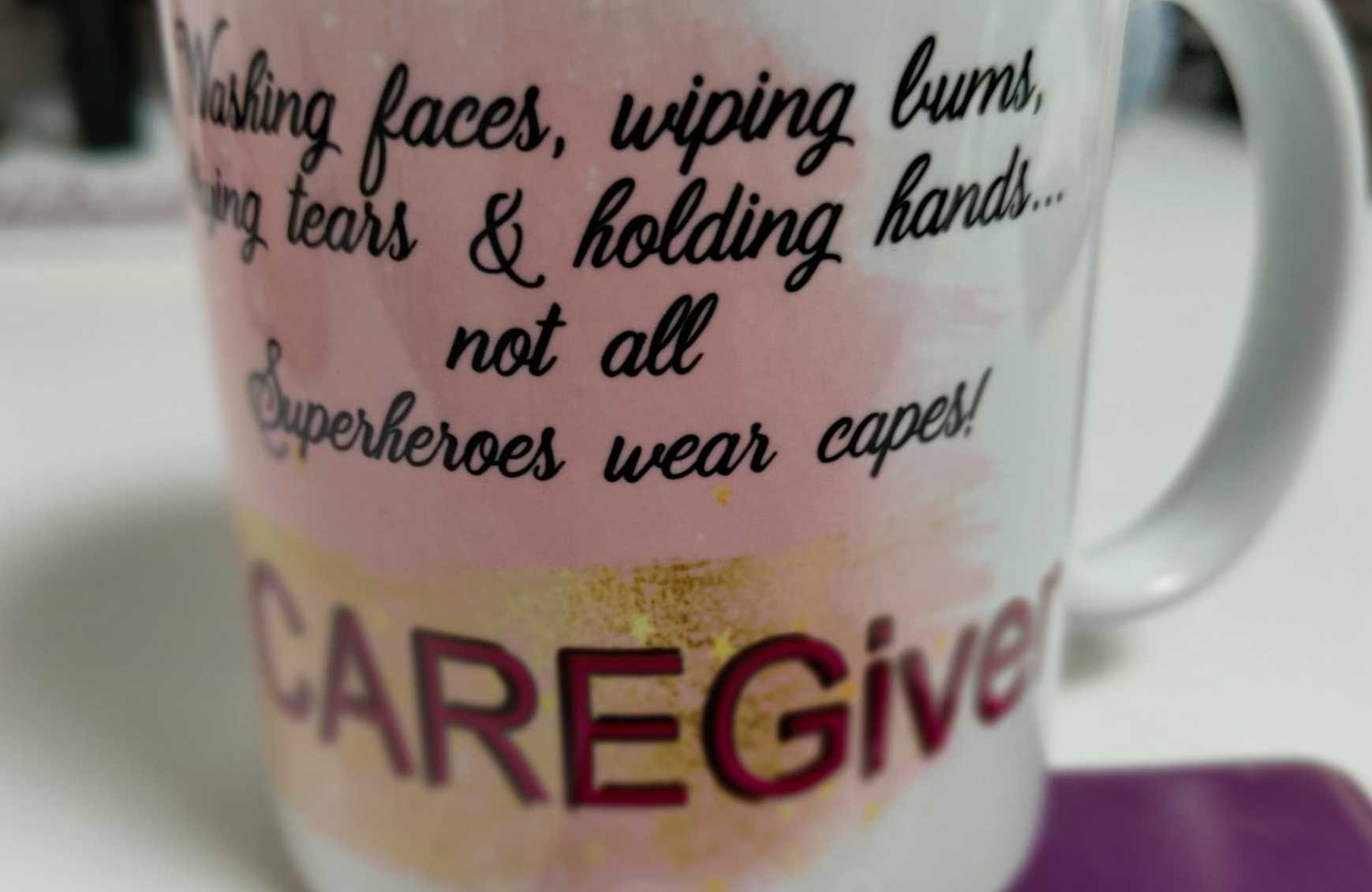